Time to try some ribs!  I’ll use this recipe with the Memphis Dust dry rub I used on the pork butts.  Also - we’re out of Salmon.  I’m going to do a double batch of the usual.  I’ll just do 6 pounds for four hours, then do 6 more for 4 more hours. 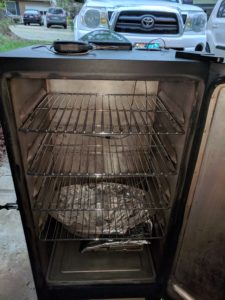 I bought what I thought were 3 racks of ribs - 3 large vacuum-packed things of ribs from Costco.  About 30 lbs total.  What I didn’t realize is that each vacuum packed bag contains 3 racks of ribs…  So I’m going to do 9 racks of ribs.  This is stupid and I almost certainly don’t have enough room in the smoker, but it’ll all work out :-) 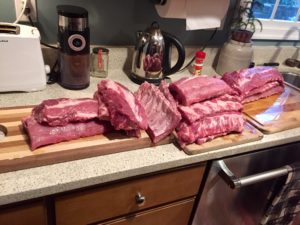 1900, 5 May 2018: Started the smoker at 225℉ and started washing, salting and dry-rubbing the ribs.  I used 1/2 tsp salt per pound, although didn’t get it as evenly-distributed as I’d like.  I wish I had salted these earlier, but we don’t have the fridge space or the time.  I used up all the remaining dry rub from the earlier pork butts.

1950: Prep of the ribs is done, and they’re on the smoker.  The smoker is ridiculously full.  The ribs are leaning on each other.  This is silly…

2040: Prep done, went and checked the ribs.  The smoker says the temperature is only 165℉…  That seems very unusual to me.  Typically, the smoker takes only a short time to return to temperature.  I tried to slide the racks away from the back wall, thinking that maybe something was in contact with the thermometer for the smoker.  I don’t believe that was the case.  I believe that the meat is restricting the flow of air too much.  I moved meat out from the back wall and opened the vent fully.  The smoker feels like it isn’t very hot…  The meat at the bottom though is quite warm.  There are two temperature probes in place.  One registers a meat temp of 120℉, and the other 75℉.  I think the former is in contact with bone, but it’s also likely that it’s the lower probe and the meat is actually hotter than the other meat.  This is going to cause a problem for me.  I don’t want some ribs to be much more done than the others.  I don’t want them to be cooked quickly.  I want slow cooked…  Hopefully the smoker airflow will work better and temperature will equalize, permitting the smoker element to turn off.  We’ll see.

2100: I opened the door again and used the other temperature probe on the meats.  The other probe, placed in meat on each level, registered between 133℉ and 140℉.  The probes in the meat registered 150℉ and 105℉.  I’m going to assume that the actual meat temp is 133℉ to 140℉, and that the probes are in parts of the meat that isn’t very representative of the correct temperature.  Most importantly - the meat is cooking at a somewhat consistent temperature throughout the smoker.

2200: I removed the bottom half of all the ribs - they were past the temperature I’d hoped to achieve, the smoker still hadn’t reached temperature, the lowest ribs looked like they were starting to burn.  Burn!  In a smoker.  Craziness.  I thought that by removing the bottom half I’d allow more smoke to circulate and bring the temperature up.  I tasted these ribs that were removed.  The ribs closest to the burner, and hottest, were tender and good.  They were almost what I’d hoped for.  The ribs slightly further away were tougher.  Still good, but not quite what I’d wanted.  I left the remaining half on for another hour, despite the other half already being at the desired temperature.

2300: I removed the other half of the ribs.  This second half seems to be as consistently tender as the hottest ribs in the bottom half.  This is what I’d hoped to achieve.  I’m happy, even if this did not go anywhere near plan.

1126: Fish went on the smoker.  I didn’t clean the smoker at all - I dumped the water pan and refilled it.  This may impart some pork seasoning to the fish.  We’ll see.  I doubt it’ll be bad though.

1136: Second half of fish is drying now.  The smoker is definitely burning up some of that pork fat that was in there.  Hopefully that doesn’t impart a bad flavor to the fish.

1226: A lot less smoking from the pork remains, at this point.  I basted the fish - it’s clear that they cooked pretty hot for the first hour.  There is much more albumin than expected on them right now.  I’m not too worried though, it’s not too far off that second time I smoked salmon.  They might be done a little early.

1326: Turned temp up and basted.  Normal amount of albumin.

1426: Went out to turn the temperature up and baste the fish, and checked their temperatures on a lark.  The fish was done!  It was at the mid-high range of its intended temperature.  I brought it all in without basting it again.  I suspected that the smoker had been running a bit hot the entire time - especially at the beginning.  I think that beginning heat supercharged everything and the fish finished faster.  It tastes good…

1540: Lots of albumin again, it was probably burning hot again…

1740: Once again - right before I crank the heat to the top value, the fish is done.  Temperature is perfect, I pulled it off.  Tastes good.

Next time, look out for the ribs membrane on the bottom. I have not noticed this while eating these, but maybe removing it, if it’s there, will be even better. https://youtu.be/I-RL_f8qdJE

Sous vide ribs are also a thing to try. https://skillet.lifehacker.com/you-can-make-these-smoky-sous-vide-ribs-without-a-gril-1826330999/amp Those look better than smoked. However, that’s probably because I epically screwed up these smoked ribs. Not that they aren’t still awesome ribs, just, ribs are awesome to begin with.